All of my friends know I can’t get around town without Google Maps. I don’t memorize street names, but I do have markers that signal me where to turn. I know I’m heading toward my friend’s house when I pass by Clovis East. I know I’m going toward Fresno State when I see the harsh glare of fluorescent light from inside Planet Fitness. So, when someone said, “Politicians don’t care about anybody south of Shaw,” I was confused.

When I was studying at my old college, Fresno City, I knew I was going to be late when — precisely ten minutes before class, like clockwork — the train-stops were raised and the warning lights blared.

That was the same railroad track that white residents, in an 1873 town meeting, decided was going to be the dividing line. They decided “not to rent, sell or lease any land east of the railroad tracks” where the city decided to reserve “the southern quadrants of the city for polluting and foul-smelling industrial businesses” to the Mexican immigrants that worked in those dirty factories. South of Shaw: a visible manifestation of the vicious persistence of segregation.

Following the 2008 financial crash, my parents decided to move from Orange County to Fresno. One of the first things my mom heard about Fresno was from her future coworker, advising her to, “Make sure you live somewhere that feeds into Clovis Unified. It’s better there than the other district.” It was true. My marching band got to go to the national marching band competitions, competing against schools that had larger-than-life props. I got to meet with my counselor at the end of every school year to plan for the next academic year. This was my normal.

Politicians don’t care about anybody south of Shaw

Growing up, when I thought of segregation, I thought of Brown v Board, Eisenhower and the Little Rock 9, and the Freedom Rides. These stories were the South’s. California was a bastion of equality compared to Alabama. It turns out the jewel of privilege is that it is invisible to the beholder. My normal was not other’s normal. Whereas my zip code broadened my opportunities, it narrowed others. A friend of mine who went to Fresno Unified said that, “Most seniors at Edison have either never met their counselor or don’t even know their name, who they are, and what they look like because of how hard it is to reach them.” That is wrong when your counselor is supposed to be your oracle for advice on college.

According to data by Public School Review and the CA Department of Education’s LCFF Funding Report, Clovis Unified School District has $12,545,561 more in property taxes than Fresno Unified, which educates the majority of kids South of Shaw. That, given the previous anecdote, can’t be a coincidence.

Segregation isn’t a ghost. Fresno’s brutal history with segregation has yet to be just that: history. It is very much the present. It’s even in the air.

To get involved in this fight against segregation, specifically regarding public schools, join the Youth Civic Engagement Program at the Dolores Huerta Foundation. Email cacevedo@doloreshuerta.org. To get involved regarding air quality, visit healthyfresnoair.com. 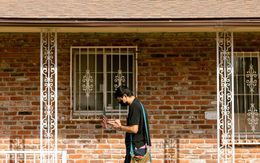